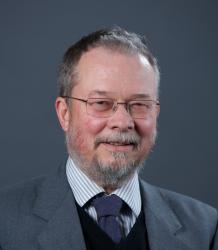 Professor Christopher Southgate trained originally as a research biochemist. He has taught for the Dept on the science-religion debate (and related areas such as environmental ethics) since 1993. His research interests include the problem of suffering in evolution, the concept of glory in the natural world and in religious poetry, tragic events affecting church congregations, and the science of the origin of life.

Chris teaches the undergraduate modules 'Evolution, God and Gaia' and 'Big Questions in Science and Religion’. He has a postdoc and four research students at present, and welcomes enquiries from others interested in his areas of expertise.

Chris's book 'The Groaning of Creation: God, Evolution and the Problem of Evil' was published by Westminster John Knox Press in 2008, and has become a seminal work on suffering in creation. He is also the editor of 'God, Humanity and the Cosmos' (Continuum, 3rd edition 2011), a standard text in the science-religion field. His most recent book is 'Theology in a Suffering World: Glory and Longing' (Cambridge University Press, 2018).

Chris is also the author of eight collections of poetry, the most recent being 'Rain Falling by the River (Canterbury, 2017) and 'Chasing the Raven' (Shoestring, 2016). For more information see Chris's website www.christophersouthgate.org.uk.

The interaction of evolutionary theory with Christian theology. See his podcast in the 'Homebrewed Christianity' series.

The origin of life as a problem in science, theology and philosophy.

Environmental ethics in relation to Christian theology, with particular reference to the climate emergency.

The poetry of T.S. Eliot, G.M.Hopkins and R.S.Thomas.

The concept of 'glory' in the Bible and tradition.

Ministerial responses to tragedies in congregations (see tragedyandcongregations.org.uk for a project funded by the Templeton World Charities Foundation Inc. from 2017-21)

Chris has a long-time collaboration with Dr Andrew Robinson, Honorary University Fellow in the Dept. Robinson and Southgate were one of only two teams in the world to gain all three rounds of funding in the Science and Transcendence Advanced Research Series (www.ctnsstars.org).

Chris has been working with the Revd Canon Dr Carla Grosch-Miller, Postdoctoral Research Associate in the Dept, and the Revd Hilary Ison, on a project on tragedies in congregations, funded by the Templeton World Charities Foundation.

I am currently first supervisor for

one full-time student exploring the theology of permaculture

one part-time student researching the origins of human sin

one part-time student working on ecospirituality

I am also second supervisor for a range of other projects.

I am open to receiving research proposals in the areas of the sciences' dialogue with Christian theology, environmental ethics, practical theology for ministry, and the interface of poetry with theology.

Dr Sally Long on poetry and the Ignatian Exercises

Mr Gareth Richards (MbyRes) on the theological ethics of de-extinction

He also explores the theological import of his own poetry and those of others, including:

a lecture on Eliot at St Stephen's Church, Exeter

a reading in International Week at New York University

a readng in the pottery studio at St John's University, Minnesota

masterclasses at Columbia University on science and poetry, and the status of the sestina

the 2016 Gowland Lecture on science and poetry

My teaching style emphasises high levels of student interaction. Student-led seminars (including debates, etc) are a particular feature, with the aim to teach students not just how to think but how to talk and to listen as academic theologians.

I won Templeton Foundation Science and Religion Teaching Awards in 1996 and 2000 and am a Fellow of the Higher Education Academy. I gave a presentation (with a former student) of good pedagogy in science and religion at the American Academy of Religion in 2016, and contribute regularly to the University's teaching and learning training.

Two of my former students reflect on my teaching in articles in the journal 'Zygon', for September 2018.