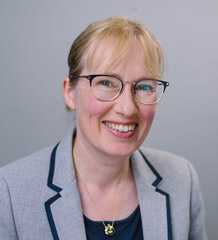 Esther D. Reed joined the Department of Theology and Religion in 2007. Previously, she taught for ten years at the University of St Andrews including one semester as the visiting O'Connor Professor at Colgate University, NY (Spring 2007). She is President of the UK Society for the Study of Christian Ethics Sept 2018-August 2021.

Esther's research and teaching are broadly in theological ethics, that is, the exercise of reason informed by the witness of Christian tradition(s) to the self-revealing grace of God that moves between the bible and human action. She has particular research interests in

She has 'lead' supervised 15+ research students to successful completion of PhDs, and 5+more to Masters by Research and MPhil awards. She is open to talking with prospective students about their areas of interest.

Esther has given numerous invited lectures including for the University of Bonn, the Berlin-Brandenburg Academy of Sciences; XII International Bonhoeffer Congress in Basel; New York Seminary; and University of Leuven.

My research life began with a study of the political theology of Dorothee Soelle. Her work inspired me to study the pathologies of the modern era through the lens of G.W.F. Hegel's construal of the master/slave dialectic and theory of recognition. After completion of the PhD, I concentrated on relations between Hegel and Schleiermacher and on some of Schleiermacher's early political writings and hermeneutic theory.

The Ethics of Human Rights: Contested Doctrinal Problems (2007) offers an account of 'right', 'rights' and 'Christ the measure of natural rights' that seeks to support Christian people who use human rights instruments in diverse practical and legal contexts. Following Dietrich Bonhoeffer's starting point for discussion of natural rights, namely, Ecce Homo! 'Behold the Man' (Jn 19:5), the book argues that neither antagonism nor indifference are the only options available to Christian people in dialogue with, or working with, secularist approaches to human rights. A tropological reading of Genesis 9:1-17, God's covenant with Noah, is developed as a means of asking how the bible challenges, directs and gives substance to critical Christian engagement with human rights discourse.

Written at a time when many secularist theorists seem variously unable or unwilling to denounce torture as wrong, Theology for International Law (2013) offers a systematic engagement with contemporary issues of international law and its relevance for modern theology. Christian theology is familiar with questions about the relation of church and state, divine and human law, but little attention has been devoted to questions of international law. This book discusses challenges to classic just-war thinking from so-called fourth generation warfare, peoples and nationhood within divine providence, the ethics of territorial borders and the militarization of human intervention.

The Limits of Responsibility: Engaging Dietrich Bonhoeffer in a Globalizing Era (2018) addressed the problem that Christian ethicists are ill equipped to think about questions of responsibility that extend beyond a tightly drawn agent-act causality nexus. The discipline is familiar with the topic of consumption where implications for action lead fairly directly to the need for lifestyle changes respect to food and clothing, whether or not to travel, whether to buy books electronically, renovating furniture rather than buying new, and such like. This book is about moral reasoning when relationships between agent, act and its consequences are often untraceable.

Christian ethics, political theology and practical theology
Research topics currently (or recently) supervised and co-supervised
The Problem of Moral Ambivalence: Revisiting Henry Sidgwick’s Theory of Rational Benevolence as a Basis For Moral Reasoning, with Reference to Prenatal Ethical Dilemmas
'World view' as a key for non-specialist teachers of RE
An Examination of Prevalent 21st Century Models of Community Engagement by the Black Churches
Moral Disengagement, Hope & Spirituality: Including an empirical exploration of combat veterans
Theological Praxis of Emerging Churches in America
How Thomas Arnold’s Christian convictions shaped his view of what makes a good education, with reflections and applications for the twenty-first century
John Wesley's theology of liberty and human rights discourse in the Methodist Church GB
Theology of fear in Thomas More
The theology and practice of teetotalism in early Methodism
A new natural law critique, with particular reference to Robert P. George
Experiences of NHS chaplaincy
Missional churches in the UK
Theological Praxis of Emerging Churches in America
The Theology of Miroslav Volf
A Theology of Disability
Women in 19th and 20th Century America: Religion and Reform
Research Topics Supervised Elsewhere
The Passions and the Moral Life
Religious and Ethical Motifs in the Novels of George Eliot
An Historical and Theological Analysis of Korean Fundamentalism
Topics in Feminist Theology

Beyond striving to ensure that my students acquire a solid knowledge base in Christian ethics and political theology, my approach to teaching is driven by the demands of graduate workplace. A senior manager in a large multinational company replied recently to my question about what they look for in a prospective employee. ‘The ability to defend their work. … You’d be amazed how many people ask for extra time when I say that they are presenting the report tomorrow not me’. Mindful of this kind of demand upon graduates, I require of myself clear answers to the following:

Facing these questions means that the teaching encounter should challenge me, as well as my students. I must provide the conditions in which students can develop the knowledge base and skills toolkit with which to investigate the intrinsic interest of the subject matter. I must use classroom opportunities to help students realize their educational potential.

Modules that have taught recently, or contributed to, include: